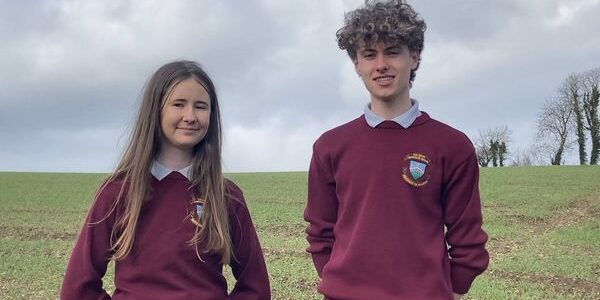 Hemp has over 50,000 potential product applications, and can play a role in sustainable farming, say the siblings, transition year student Cian and second year student Caoimhe.

Cian says uses for the hemp crop include hemp insulation, hempcrete (an eco-friendly alternative to concrete), textiles, and hemp bioplastic.

Their project calls for hemp processing facilities, to enable hemp as a sustainable alternative land use by farmers while providing rural employment.

Their project began in 2019 when Cian took part in the RTÉ Youth Assembly on Climate, and was able to present in Dáil Éireann on his hemp proposals. The Government has committed to explore the potential for growing fibre crops such as hemp.

Cian and Caoimhe have conducted research, hosted hemp information meetings, created a website, and engaged on hemp with public representatives.

They grow their own hemp crop for research.

Caoimhe says: “We believe that farmers are being put under ever-increasing pressure to deliver climate action without being given any viable alternatives to their current farming methods.”

Cian says: “Data shows that, through government investment in the hemp industry, hemp has the potential to create 82,000 jobs, over eight years.”

Caoimhe says: “With hemp’s ability to capture on average 8.9 tonnes of carbon dioxide per acre, hemp is more efficient at carbon sequestration than trees.”

Cian says: “We hope that Ireland will be able to satisfy its climate action and rural development plans through the creation of Ireland’s ‘hempire’.”

Since 1999, over 49,000 young people have taken part in the ECO-Unesco Young Environmentalist programme.