Jersey Hemp set to harvest its biggest ever crop 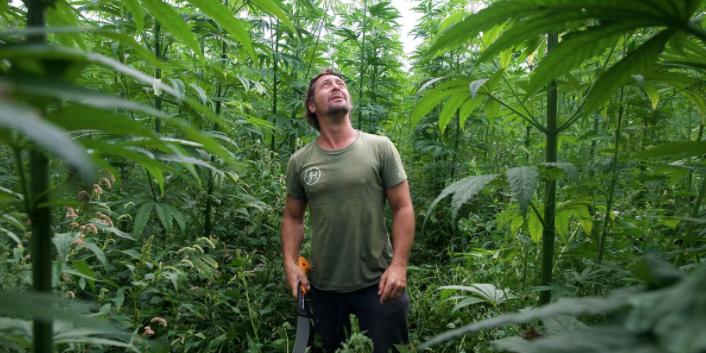 The company – the first British grower licensed to cultivate hemp flowers for CBD extraction – has undergone rapid growth since forming seven years ago, and has seen the area of land under cultivation rising from 30 vergées in 2019 to about 200 this year.

Chief executive David Ryan, who is currently dwarfed by mature crops which can reach up to five metres in height, said he was optimistic about this year’s crop.

‘We had a challenging start to the season, when we grow crop for hempseed, with one of the driest Mays ever, but the weather has been more favourable since we planted the main flower crop in June, and once that got established it has flourished,’ he said.

Since gaining a licence to produce CBD oil from its locally grown hemp in August last year, the company has looked to scale up its operation in an effort to claim a share of the UK market.

The UK, where CBD product sales are estimated to be worth £300 million and could reach £1 billion by 2025, is by far the largest of the 15 European export markets served by Jersey Hemp.

This year’s harvest will utilise a new harvesting machine, which can potentially cover an entire field in one day, and an industrial drier for the harvested flowers.

‘We have looked to scale up the business in all areas,’ said Mr Ryan. ‘The new equipment increases our capacity by five times and we are seeking to fulfil much larger contracts with retailers in the UK.

‘The Covid-19 pandemic has seen a lot of diversification into online sales by UK retailers, but they have also been able to switch some sales back to the high street in recent weeks.’

CBD oil is increasing in popularity as a natural pain reliever and is reputed to have nutritional and environmental benefits.

Unlike THC, the psychoactive element found in cannabis, CBD has no psychotropic effects.

Hemp cultivation is distinct from medicinal cannabis, which is cultivated with THC and is an area that Jersey Hemp is not currently involved in.

‘We’re not ruling anything out for the future, but medicinal cannabis is a long and expensive road fraught with risks,’ Mr Ryan said.

‘Right now we can do everything we need with hemp.’