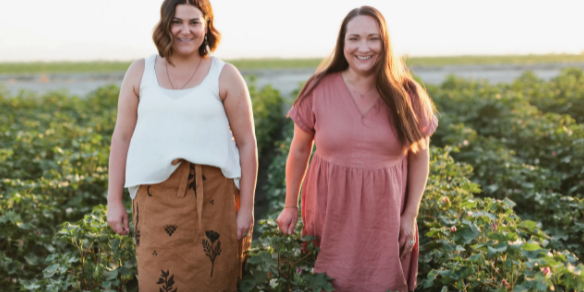 A woman-led tampon company based in Tennessee is stepping into the crowded menstrual product industry in an effort to disrupt it and give women more options for their period care.

Claire Crunk launched her tampon company, Trace, last August after leaving a career in women’s health care in 2018 due to burnout. Her departure came when lawmakers passed Agriculture Improvement Act of 2018, also know as the Farm Bill, which legalized hemp growing and opened the door to a new industry for Tennessee.

She soon had a lightning strike moment as she learned more about the plant: Its fibers could work perfectly as a tampon. So she established Southeast Hemp Fiber to develop fiber processing methods and grew a test batch on her family’s farm in Santa Fe, an unincorporated community in Maury County. Two years later, Trace is the only company to figure out how to make it work, and the process is protected by trade secret.

“We have had to really learn on our own how to create this fiber that is optimized for an absorption product, and we’re the only ones who have figured it out,” Crunk said.

Claire Crunk launched Trace, a hemp tampon company, last year. Meg Galaske works as Trace’s creative consultant. The two women both left careers in health career.
And while Crunk underwent her career transformation, so did Dr. Meg Galaske, a Columbia-based pediatrician who was suffering burnout, too. The stress she faced catapulted her into dark and depressing thoughts. She made a move to leave health care three weeks before the pandemic exploded in Tennessee but stayed on longer to assist with patients. She now works as a reiki and energy worker and focuses on holistic health.

The two women are “yin and yang” to one another, they said, with Galaske as the creative arm and Crunk handling the analytical side. A year into Trace, they expect the tampons to be available for online purchase in the second quarter of 2022 and in stores in 2023.

“It’s been a match made in heaven,” Crunk said. “We’re both healers in different places, and so it just makes total sense that we’re taking that healing modality and applying it in different ways.”

Trace is one of the first businesses to be selected for Williamson County’s new innovation center housed on the former O’More College of Design campus. The entrepreneurial hub, established by the Heritage Foundation and Williamson Inc., will serve as a launching pad for new businesses in the community.

Menstrual products are a nearly $20 billion industry, and those leading the top companies are all men.

With backgrounds in health care and a passion for women and the environment, Crunk and Galaske are ready to interrupt the status quo. Their planned disruption comes at a good time. Global research in the tampon industry shows that women, especially younger consumers, prefer natural, renewable materials in their tampons.

“We’re innovating everything from the soil to the vagina,” Galeske said. “Every step has had to be different than the way it was before.”

While women have been menstruating for millennia, the tampon as we know it today is fairly new. Women previously relied on do-it-herself products, like rags or wool, before the mass production of feminine care products was launched. Many still rely on homemade options if they can’t afford or don’t have reliable access to menstruation care.

Kotex developed a mass-produced sanitary pad after World War I when it was discovered that cellucotton, made from wood pulp, absorbed more blood than cotton. Tampax was the first brand to market the modern tampon after its founder purchased the patent in 1934.

In the 1940s as women entered the workforce during World War II, the need for reliable period protection grew. But it would take until 1972 for the first commercial to debut featuring a tampon, and it wasn’t until 1985 that the word “period” was uttered on television.

One of Trace’s top goals is to heal the earth, and they plan to do so by growing hemp, one of the world’s oldest domesticated crops.

“People who have periods really do care about the environment,” Crunk said. “Look at all the things we do in our daily life to make a small impact, and it’s a lot of work. I was just frustrated that folks were having to totally change their menstrual habits to reduce their environmental guilt. So by making a product this way, our customers can heal the environment and reverse climate change just by having a period.”

Hemp, which was legally required to be grown by Jamestown settlers in 1619, fell out of favor with the government in 1937 when it was banned and wrongfully linked to marijuana. It was replaced with textiles like cotton and polyester. But now it’s being eyed again as a useful crop that could restore the environment. It absorbs carbon dioxide and grows in a variety of climates.

The plant is fast-growing and low maintenance. Research compiled by the Reason Foundation, a nonpartisan think tank, shows that growing hemp requires less energy, and the production of hemp offsets carbon dioxide emissions. Polyester manufacturing requires six times the energy needed for industrial hemp. Hemp is more defensive to pests and more weed resistant than cotton, requiring fewer pesticides and herbicides, if any. It requires less water, too, which means fewer resources obtaining the water and less money spent by farmers.

“If we don’t make giant changes, then the earth isn’t going to be sustainable for us to live,” Galeske said.

The women are a few weeks away from receiving prototypes of the tampon, which is made of regenerative cotton and hemp fiber blend. Regenerative agriculture works to enhance and rehabilitate farming, from soil health to water management. The hemp is grown by North Carolina farmers, and the cotton is farmed in California. The applicator is made from biodegradable hemp biopolymer.

Traditional tampons are made of a cotton and plastic blend to hold the tampon together. Trace replaces the plastic strands with longer cotton fibers to bind it. A standard tampon expands longitudinally as it absorbs blood, which can sometimes create a pinching sensation. To combat this, Trace’s tampons will expand out rather than lengthwise.

To learn more about Trace, visit their website at traceyourtampon.com. Those interested in investing can reach Crunk at [email protected]

Reach Brinley Hineman at [email protected] and on Twitter @brinleyhineman. To stay updated on Williamson County news, sign up for our newsletter.

This biodegradable fake fur is made from cannabis plants
October 11, 2021

Forget about corn, this central Pa. farmer wants you to tour his hemp maze
September 28, 2021