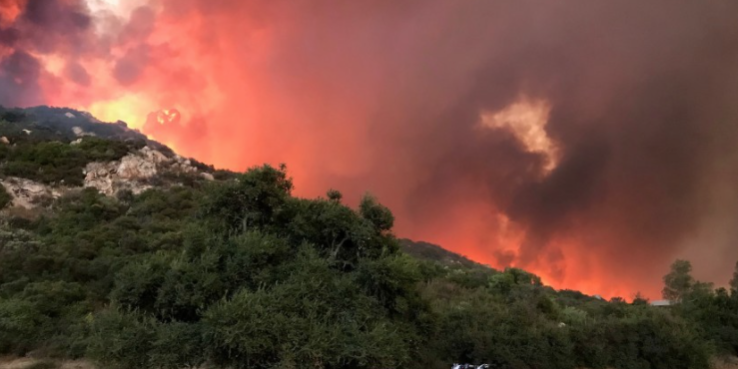 The first time the Campos family realized their Jamul hemp farm might be in danger was around 2 p.m. on Saturday, Sept. 5.

“We started to see smoke but didn’t think it was too much of a risk,” says Brooke Campos, co-owner of No Boundaries Farm.

By 3 p.m., Campos’ brother, Blake, and her father, Eddie, along with a few other farmworkers were battling the blaze themselves. Not long after, they evacuated. No Boundaries eventually burned to the ground in the Valley Fire along with a neighboring hemp farm, Inya Hemp.

Though those are only two farms out of many scattered throughout rural areas in San Diego County, a variety of factors make hemp farms particularly susceptible to California’s fire season, which becomes more intense with each passing year.

December 2018’s passage of the Farm Bill, which legalized hemp cultivation across the United States, gave the green light for individual municipalities to begin investing in the industrial crop.

Since then, a new hemp industry has emerged. According to the County of San Diego Department of Agriculture, Weights & Measures (AWM), the county has 87 registered growers. The Industrial Hemp Cultivation Program, administered at the state level by the California Department of Food and Agriculture (CDFA), was established in May 2019. But just over a year into its inception, the new sector is already facing the effects of climate change.

There is also an increasing threat of fire.

“Fires occur annually throughout California but for San Diego’s legal hemp industry, which is really still in its infancy, the location and span of this year’s fires could greatly impact our current outdoor cultivation, which is often harvested in October,” says Stuart Titus, CEO of Medical Marijuana, Inc. 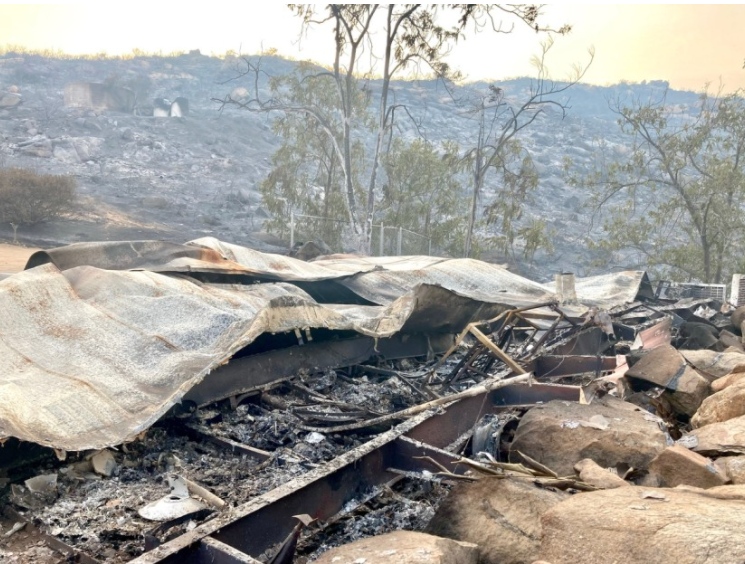 Those risks came to a devastating head during the Valley Fire, which Campos said destroyed their business.

The family-run farm, which was founded in October 2019, lost three structures, including her brother’s home and a barn where their hemp clones were housed. Clones, which are plants that are cut from an original “mother” plant, are used to start new crops each growing season while maintaining the same genetic line. Losing a stable of clones means that cultivators lose unique genetics that may separate their particular product from other growers.

Campos says six of the property’s 40 acres were licensed with the county and subsequently planted. She estimates they had 15,000 hemp plants in the ground and upwards of 25,000 plants on the property in total.

Now most of those are gone. Campos estimates the monetary value of the loss to be around $500,000 though she said it is still too early to tell for sure. The loss includes more than plants — Campos says their offices, which contained all of No Boundaries’ finished products, samples, packaging, trade show, and point-of-sale materials, were also destroyed.

Some of their outdoor plants were not incinerated, Campos says, but she is nervous they could be ruined anyway. In addition to being a young industry, there are other hemp-specific challenges when considering wildfires. Hemp plants, like all varieties of cannabis plants, are particularly susceptible to smoke taint.

“Specific threats wildfires pose to hemp cultivation are not always obvious,” says Joshua Swider, Co-founder & CEO of Infinite Chemical Analysis Labs. He says that though fires can destroy an entire crop, smoke damage is another serious concern for growers.

“Smoke alters the quality and taste of hemp, and ash particles from buildings could contaminate a grow with toxic chemicals. Arsenic, heavy metals, copper, lead, transformer fluid, brake fluid, fire suppressant or retardant — you don’t want to be breathing that stuff in and you definitely can’t have it in your medicine,” Swider says.

Unfortunately, for cultivators like Campos and her family, rebuilding will be an uphill battle.

“We don’t have insurance on our property because of our location in rural Jamul,” Campos says of the farm, located on West Boundary Truck Trail, the same road as Inya Hemp’s farm. “My dad has had four different insurance companies come out to our property in the past couple of months just to be able to get some kind of policy going. We were denied insurance by all four of them,” she says, declining to name specific companies.

Campos also says they had “zero” ground or air support while fighting the blaze themselves, noting that just a handful of their own team members were onsite.

“They were fighting the fire and trying to save our farm. Our understanding is that all fire support was deployed on the Alpine side of the fire, not the Lawson Valley/Jamul side,” she says. She adds that though she assumes the reason is that the fire started on the other side of the valley, both she and her family “personally feel that land in Jamul may not be as valuable as Alpine to the county.”

Campos and her family have since started two GoFundMe campaigns — one for the farm and another geared towards rebuilding her brother’s house.

Durckel says that hemp farmers can find assistance through the United States Department of Agriculture (USDA) and, in some cases, the Small Business Administration (SBA). She also refers growers to The Farm Bureau. Durckel adds that the AWM will participate at the Valley Fire Local Assistance Center, located at the Rancho San Diego Library and suggest those who have lost property file a form with the AWM so San Diego can qualify for further emergency assistance.

Titus offers further suggestions. “The local government may be able to help provide growers with additional insurance as a part of the licensing program in addition to the national hemp insurance providers such as CannGen,” he says.

His own company grows outdoors, but Titus also suggests moving growing operations indoors. That, however, requires a lot of electricity and other resources, like ventilation and temperature control, making growing indoors expensive and less environmentally sustainable. Titus suggests local governments could subsidize transition costs for farmers who have suffered fires and want to move their crops indoors.

Though recovery solutions exist, they are not guaranteed, and farms like No Boundaries and Inya Hemp’s will unfortunately serve as test cases for San Diego County’s fledgling industrial hemp industry.

Campos says the GoFundMes are intended to get her family and their farm “back to a starting point.”

Of Hemp’s Many Uses, One of the most promising could be in construction
October 13, 2020